Dogs like humans experience nervousness, anxiety and other depressive behaviors.

You see it in your dog’s eyes every time you reach out for your car or house keys to leave. That cute, despairing look that you would do everything to avoid as the effects of separation anxiety begin to descend on your furry friend.

It’s always hard to say goodbye but for some dogs it is a lot harder than normal. Incessant howls, constant running around and groveling are just some of the signs that your dog could be suffering from a void of separation anxiety or nervousness of some sort.

Some dogs also suffer from stress disorders and irritability during situations that are likely to be extremely strenuous to a dog such as loud firework displays over the holidays, the road of thunder during storms, trips to the vet or even long car rides.

Recent advancements in medicine have shown a myriad of similarities between humans and their furry best friends.

Dogs have been shown to experience human emotions like love and envy, have the intelligence of a 2 year old infant and now even the ability to remedy several of these psychological ailments through natural home remedies.

With the shift by many dog lovers and owners to natural remedies to aid in the treatment of their dogs a lot of questions have emerged around the use of valerian root for dogs.

What is valerian root and what positive effect will it have on your dog?

Is valerian root safe for dogs?

This is why we have taken it upon ourselves to help you answer these and many more questions around the pros and cons of using valerian root for dogs.

Have you ever felt that stinky dirty-sock like smell during a routine walk through the herbal remedies section of your local store?

If you answered yes to this question, then you have most likely had an indirect encounter with valerian or Valeriana officinalis as it is scientifically referred to.

Valerian has for sometime now been used to aid humans with anxiety and sleep disorders to reduce nerves and find sleep due to its sedative qualities. 👉 In dogs, it is preferred to pharmaceutical sedatives due to its ability to calm them down without altering their brain function.

With its two in one power to relieve both psychological and physical stress valerian helps hyper dogs calm down especially when taken before thunderstorms, long car rides, firework displays and even the dreaded trip to the vet.

Generally, taken before your dog has to participate, engage in or experience a stressful situation it’s anxiolytic properties have the capability to reduce anxiety in your dog.

The Science Behind It All

Valerian ingestion increases the amount of gamma-aminobutyric acid (GABA) in the brain, a neurotransmitter, that blocks nerve transmissions between various neurons that stimulate and increase brain activity.

👉 Increased GABA in the brain results in increased calm and relaxation of body muscles all of which have a sedative effect on the nervous system.

The relaxation of these muscles and blood vessels naturally lowers blood pressure in dogs and aids dogs suffering from insomnia by enhancing faster and better quality sleep. 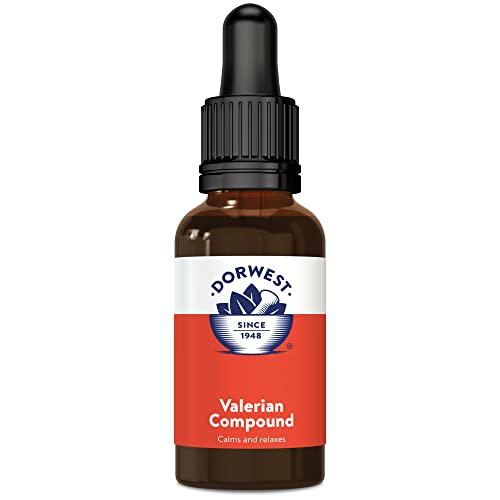 How to give a dog Valerian Root?

Valerian may be administered to dogs in many forms; tincture drops, capsules or even as whole-dried root.

The form you administer it in (whole-dried, tincture drops or capsule form) is what will determine the appropriate dose you are to give your dog in order to ensure healthy consumption of Valerian root.

First, it should be administered three or four times a day at least three days before the likely stressful event.

The human version of Valerian root you are likely to find at your local store is just fine for your dog’s consumption.

How much Valerian Root can i give my dog ?

As a standard measure give your dog 10 grams of Valerian root for every 1 kilogram of body weight.

For liquid tincture drops; 20% of the human dose which often averages four to six drops is the standard. This may vary however with the size and weight of the dog playing a huge role in determining the number of tincture drops to administer.

Siberian Huskies and Bernese dogs may use up to 60 large drops while small dogs such as the Yorkshire Terrier and the French Poodle may need only 10-15 small drops in a day.

Valerian root dog treats pocketed in “Pill Pockets” are also another clever way to administer the drug to your dog easily.

For tinctures insert a plastic dropper into your dog’s mouth and squeeze the liquid down into the throat.

Be careful to ensure that your dog’s mouth is mostly closed as you squeeze the dropper and avoid using glass droppers as your dog may break the glass while closing its mouth to swallow.

You may also decide to crush a capsule and mix it within your dog’s food if direct ingestion has proved to be a challenge. 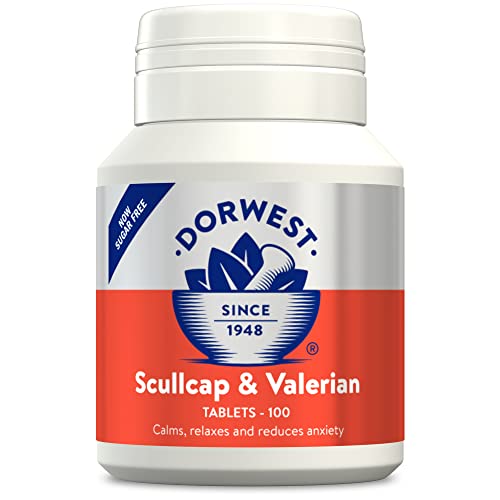 Be keen however to exercise sufficient precaution when administering valerian root to your dog.

Though considered safe and even often recommended by many integrated vets, it is always wise to consult your vet before administering any new medication to your dog.

As a matter of principle, pregnant and nursing dogs should not be administered with valerian root as some studies investigating the safety of such action are yet to be conducted and or concluded.

Incorrect administration of valerian root may result in it interacting with other drugs especially those that affect the nervous system. 👉 Due to its calming effect on the brain it shouldn’t be used with any medication that alters brain function. Anaesthetics in particular should not be administered in conjunction with valerian root.

Be keen to wean your dog off the herb at least 2 weeks before any surgical procedure at the veterinary doctor’s office.

Herbalists grade herbs according to their cooling effect or heating effect. Herbs that generate heat are fondly referred to as hot while herbs that induce a cooling effect on the body are termed cold. Valerian Root in this regard is a “hot” herb as it gently induces heat onto the body once consumed.

As a warming herb, herbalists advice that it is not suitable for dogs that suffer from hot spots, itchiness and those that are generally quick tempered.

Larger than recommended doses of Valerian Root may have a negative effect on your dogs blood pressure and result in uncomfortable stomach upsets.

Overdose will reduce your dog’s blood pressure to a dangerous level a feature that should be avoided at all costs and is highly ill advised.

Drowsiness and a sense of lethargy are also common side effects of administering Valerian root to your dog so be sure to administer the drug at an appropriate time. 👉 If you are seeking to aid your insomniac dog find sleep, be sure to administer the drug in the late afternoon and early evening in order to avoid disrupting or negatively altering your dog’s sleep cycle.

Administering of the drug at wrong or rather inappropriate times has been known to inconveniently alter dogs’ sleep cycles and activity levels during the day.

Other notorious side effects of valerian root ingestion include dizzy spells, darker than usual color of urine, over excitement (a reverse side effect) and itchiness.

Some debate however has continued to rage as to the health benefits and effectivity of valerian root for dogs compared to melatonin.

Melatonin is a powerful hormone produced by dogs in sleep and often recommended by veterinary doctors to dog owners in order to treat dogs suffering from the symptoms of insomnia.

The sleep triggering effect of melatonin makes it a likely candidate for use by dog owners to get hyper dogs off to sleep with its calming effect reported to last up to 8 hours.

👉 Caution is however advised as xylitol, an artificial sweetener with potentially harmful effects on your dog is a common additive to melatonin supplements.

With this one however (commercially prepared melatonin), be careful not to share your human made melatonin product and instead use a specially constituted commercial version made with just the right formula for dogs.

In conclusion, valerian root is an ancient medicinal herb with strong sedative and anti-anxiety properties.

Despite its unpleasant smell, for dog owners who know what’s it’s like to not catch an ounce of sleep during a storm because your furry friend is scared out of his or her mind, running wild scared, valerian root is a lifesaver.

Its most common uses are to help hyper dogs relieve stress, deal with separation anxiety and to help dogs exhibiting insomnia like characteristics and symptoms find sleep.

So is valerian root a safe and efficient bet for your dog?…your guess is as good as mine.