Barking is one of the fundamental aspects of doggy vocalization. It’s undeniably true that some dogs bark less than others.

However, it’s impossible to find a dog that doesn’t bark at all. Dogs bark for numerous reasons.

Your canine friend might bark to warn you of impending danger, such as a burglar or serpent. Or, the dog could be seeking your attention, perhaps to get you to join in a play. Dogs also bark as a way of communicating amongst themselves.

Whichever the reason for barking is, one thing is for sure – most dogs bark during the day or when they’re awake. It’s a bit strange to find a dog barking in his sleep.

But odd as it may sound, most dogs do bark while sleeping. But why is your dog barking in his sleep?

The main reason why your pooch might be barking in its sleep is that it’s dreaming. Like humans, dogs also have dreams. And dreams could result in barking. Other reasons for a dog barking and crying in sleep is if the dog is suffering from anxiety, especially separation anxiety.

If you find the habit of your dog barking in his sleep unsettling, you should first establish the cause. That will enable you to address the problem once and for good.

This post shall cover everything there is to know about dogs barking in sleep, including the common causes and possible solutions to the problem.

Why Do Dogs Bark and Growl in Their Sleep? It’s all in the Dreams

Many loving and responsible pet parents often wonder why their dogs make weird noises when sleeping.

As we’ve just mentioned, the main reason why dogs bark during their sleep is that they may be dreaming.

Besides barking during sleep, you can also know that your dog is dreaming if it stretches its legs, whimpers, or growls. Other tell-tale signs of a dog dreaming are if its eyes are moving underneath their lids or if its ears are twitching. Studies suggest that a dog’s sleeping pattern is nearly similar to that of humans. Which implies that dogs sleep in four phases.

The first phase of sleep is characterized by a short period of wakefulness, which usually lasts for about 10 minutes.

Next, dogs enter the second stage of sleep where their body temperature drops and heart rate slows down.

The second stage of sleep is immediately followed by the non-REM sleep, which is a deeper sleep phase where your dog’s heart rate and body temperature drops further.

It’s during the non-REM phase that your dog’s tissues regrow, its muscles and bones rebuild, and the body generally repairs itself. In literal terms, non-REM is the stage of sleep when your dog grows.

The last stage of sleep is REM, which is an acronym for Rapid Eye Movement. And this is when a dog experiences the most dreams. During the REM phase, your dog’s body is at a complete state of rest whereas its mind is most active.

Evidently, dreams are part and parcel of a dog’s life. And when your dog barks or makes other sounds and movements during sleep, it could mean that your canine friend is trying to reenact an event in its life. The event could be an exciting or traumatizing one.

It’s worth noting that when dogs dream, they usually use all of their senses. That’s why you’ll see their eyes, ears, tongues, and even noses moving. So, you may have always wondered, why do dogs twitch and bark in their sleep? It could all be in the dream.

Another thing to remember is that dream-related barks vary, depending on the dog’s breed. Some dog breeds may only give a subtle bark while others may bark unsettlingly loud.

Barking during sleep also depends on the age of the dog. In this regard, it’s generally observed that puppies tend to bark the loudest and most frequently during sleep compared to adult dogs. But why do puppies bark in their sleep?

Puppies bark considerably more often than older dogs because they slip into the REM phase much faster, and stay in that phase for a longer duration of their sleep.

SOLUTION: Being a normal part of your dog’s life, there isn’t much you can do to stop your canine friend from dreaming. However, if the dreams result in loud barks that interfere with your sleep as well as that of the dog, you might consider scheduling a visit to the vet.

Your vet might prescribe sleeping pills that will ensure the dog stays much longer in the second and third sleep phases. 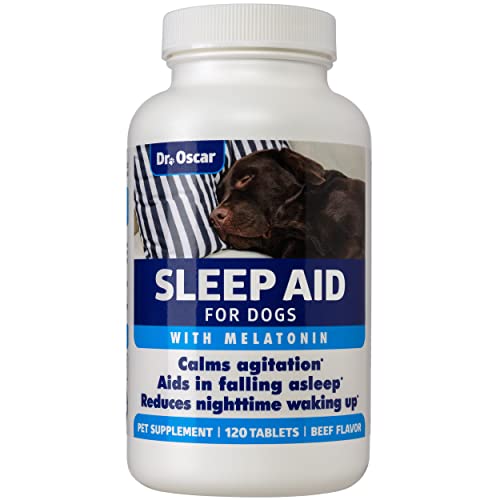 1,728 Reviews
Dog Sleep Aid for Dogs, Better Than Melatonin for Dogs or Calming Chews for…
$23.99
Buy on Amazon

Also, remember that your dog barking during sleep could imply that the dog is trying to reenact a past traumatizing experience. In that case, you should get the dog examined for post-traumatic stress disorder.

On the same breath, always do a background check on the history of a dog before adopting it. That’s especially true for dogs that are acquired from shelter homes.

If PTSD isn’t treated with urgency, it may affect your dog’s social life at a larger scale, besides just interfering with its sleep.

Why Does My Dog Cry and Bark In His Sleep – Are There Other Reasons besides Dreaming?

We’ve already pointed out that your dog barking during sleep has a lot to do with the dog dreaming. But you might still be wondering to yourself, my dog is barking and whining in his sleep, are there other possible causes?

Yes, there are indeed other reasons why your pooch might be barking during sleep.

The following are some of these reasons.

Another common anxiety disorder that dogs often suffer from is known as separation anxiety.

As the name implies, separation anxiety sets in when a dog is separated from its owner for extended durations of time. It’s worse if the dog isn’t accorded adequate mental stimulation. Some of the classic symptoms of separation anxiety include;

SOLUTION: The best solution for separation anxiety is to ensure that you give your dog enough mental and physical stimulation. Whenever you’re around, take regular walks with your dog, play with the dog, go for dips together, etc.

And whenever you’re gone, ensure the dog has enough toys to play with. You might also consider leaving lights as well as the radio and television on so that the dog doesn’t get bored. If you can, hire a professional dog trainer to keep the dog stimulated in your absence.

Besides separation anxiety, your dog might also be experiencing normal stress that’s making it bark during sleep. In that case, the problem should go away within a couple of days. But if barking during sleep persists, you could be dealing with a full-blown anxiety disorder.

Your dog’s sleeping environment is another possible cause for the dog barking during its sleep, especially if the dog barks in sleep but not when awake.

Changes in routines that affect your canine’s sleeping area might also cause it to bark during sleep.

For instance, you might have changed homes, changed the dog’s sleeping place, or brought new stuff into its sleeping area. Remember that dogs are creatures of habit, and a slight disruption in their routines could throw them off balance.

Sleep Disorders and Other Underlying Condition

If upon investigation, you discover that your dog barking at night has nothing to do with any of the above causes, then the dog might be suffering from sleep disorders. Or, your canine friend might be battling more severe medical conditions, particularly neurological diseases.

Sleep disorders mostly affect older dogs and might be the reason behind your old dog barking in his sleep. Examples of common sleep disorders in dogs include insomnia and narcolepsy.

SOLUTION: When dealing with a dog that’s suffering from sleep disorders or other medical conditions, your best bet is to enlist the services of a professional vet.

Other Things to Remember

When you’re trying to help your dog to stop barking during sleep, it’s important to ensure that the dog actually does bark during sleep.

At times, you may wake up in the middle of the night and discover that your canine friend is barking but awake. That doesn’t equate to barking in sleep. Instead, it means that there could be other factors preventing the dog from falling asleep.

These could range from separation anxiety to an imminent threat or senile dementia (in the case of older dogs). Addressing those factors is the first step in helping your dog to have a sound sleep. Experts also discourage waking the dog from sleep, ostensibly to make it stop barking. Doing so could worsen the stress factor as well as disrupt your dog’s circadian rhythms.

You understand how disorienting it is to be awoken from a dream, do you? The same applies to our canine friends.

Lastly, you must establish that the dog is actually barking during sleep as opposed to making other vocalizations. Not all sleep-related vocalizations are bad. For instance, snoring is perfectly normal for most dog breeds.

ALSO READ: How to Get A Puppy to Sleep through the Night (10 Tips)

Conclusion: So, Why Do Dogs Bark In Their Sleep?

As we’ve observed, there are numerous reasons why your dog might bark or make other sounds and movements during sleep.

For the most part, barking during sleep is a sign that the dog is dreaming. However, it could also be symptomatic of an underlying medical condition, in which case you should seek professional advice.